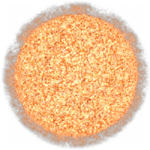 Main star and namesake of the system. It's on the large end of the K-class stars, bordering on being a G-class.

Rocky planet, has been colonized by Revnorians. The planets serves as a mining world to bring percious resources to the planet. There are two large oceans and several smaller seas upon the planet. Orbital Distance: 0.42 AU

Life-bearing planet, home of the Revnorian species. The planet mainly consists of large mountains and jungles, there are four cotinents upon the planet due to the size of them. The land mass of the planet is larger than the perecetage of ocean upon the surface.  Shares a moon with Elyon III Orbital Distance: 0.64 AU

Rocky planet, colonized by Revnorians. The second planet to be colonized by the Revnorians primarily consists of a rocky surface with various forests scattered throughout the surface. After discovering that both their planet and their home world share the same moon it is seen as a symbol for the race. The destination is popular amongst Revnorians.  Orbital Distance: 0.70 AU

Retrieved from "https://endlessskies.fandom.com/wiki/Elyon_System?oldid=5027"
Community content is available under CC-BY-SA unless otherwise noted.