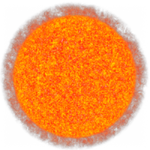 The main star of the system and its namesake.

The innermost Asteroid Belt, this ring of semi-molten rock is the result of the former innermost planet's collision with several rogue planets, each time being torn and ripped into chunks while the tidal forces exerted by the star broke off more and more bits and pieces of the shattered planets, forming the belt. The asteroids zip around at nearly the speed of sound, colliding, fragmenting, melting, and reforming several times a year. Orbital Radius: 0.25 AU

A terrestrial and habitable planet colonized by the Eurypt. Asteroids and meteors from the Inner Belt break occasionally break off and enter into orbit around the planet. This orbit, however, is not stable and decays rapidly, causing multiple large-scale impacts per century. Thanks to this, intelligent life had not yet evolved when the Eurypt colonized it, and intelligent life likely will never evolve on this planet. It has a similar biosphere to Courbohn. Orbital Radius: 0.58 AU.

A terrestrial world that is filled with jungles and mountains. The rich network of active volcanoes and geysers rapidly spread water around the planet, with several eruptions frequently coinciding to produce a massive thunderstorm that sweeps the planet, contributing to this lush, jungle environment. Orbital Radius: 0.83 AU

A rocky world with numerous active volcanoes, continually spewing ash into the sky and covering the land with lava. Orbital Radius: 2.38 AU

The outer asteroid belt. Not as thick as its inner cousin, but is still surprisingly dense. Orbital radius: 9.23 AU

Retrieved from "https://endlessskies.fandom.com/wiki/Dyhmandh_System?oldid=5025"
Community content is available under CC-BY-SA unless otherwise noted.