The Aurate System is owned by Royale Terre Mining, who is exploiting the system's rich metallic and mineral deposits for their profit. 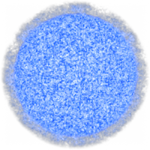 The main star of the system, it is a simple blue-white dwarf formed from the nebulae of a dead blue Hypergiant whose remnant pulsar had been pushed out by the shockwave from another nearby supernova. This left the accretion disc high in metallic and rocky compounds, and with enough hydrogen to form a star.

Rocky, Barren, contains many strip mines, normal mines, and mountains as well as a large section of very flat terrain. Most, if any, water is in pockets several hundred meters below the surface. Orbital Radius: 0.37 AU

Rocky, barren, wracked with electromagnetic storms. Scientists of all species have been trying to get permission to study this area for a century at least, but to no avail. Has a large planetary ring, thought to be a destroyed moon of similar size to that of Aurate II. Orbital Radius: 2.12 AU

A small grouping of asteroids. Like the rest of the system, it is very high in metallic compounds, and so is fertile ground for an asteroid mining operation to be started in 3035. Orbital Radius: 7.65 AU

Gas Giant, rings, 30 small moons. Gas giant itself is unusually rich in Noble Gasses while the moons, like everything else in the system, are metallic and dense, but have a habitable atmosphere. The rings on the giant are of a similar composition, but with the addition of several large chunks of mercury fulminate. Mining here is considered to be hazardous. Orbital Radius: 32.06 AU

Retrieved from "https://endlessskies.fandom.com/wiki/Aurate_System?oldid=5024"
Community content is available under CC-BY-SA unless otherwise noted.